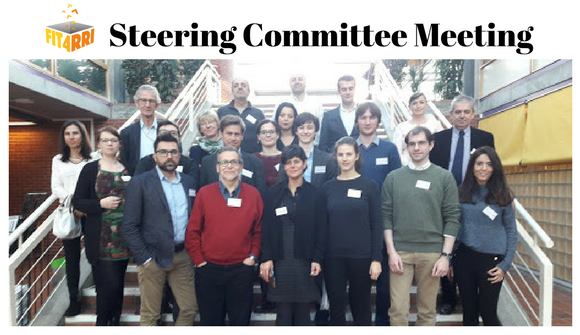 FIT4RRI is a 3 year project under “Science with and for Society”, funded by the European Commission. It has been created to activate institutional changes in RFPOs and bridge the gap between the potential role and actual limited impact of Responsible Research and Innovation (RRI) and Open Science (OS) on Research Funding and Performing Organisations (RFPOs).

It will act on 2 key factors:

Twice a year, the 13 partners of the FIT4RRI project, meet in one of the partners’ countries, to present their progress, their on-going and future tasks. Last June, the kick-off meeting took place in the Project Coordinator’s premises, the University of La Sapienza in Rome (Italy). On November, 9th-10th was held the second Consortium Meeting. It was organised in Trondheim (Norway) by the Norwegian University of Science and Technology (NTNU).

NTNU is one of the 13 partners of the project. They are leader of the sectoral workshops in Work Package 2, leading five sectoral workshops with other partners in order to collect for several sectors, first hand information on general trends, barriers and drivers of RRI.

The first day was a General Assembly meeting where all the Work Package leaders presented their work progress, whereas on the second day, two training workshops were organized by NTNU and SEERC for partners who are responsible for holding sectoral workshops and co-experiments in their respective countries.

We want to thank NTNU for hosting the second Consortium Meeting, it was a great pleasure having all the partners reunited, and a special mention to the perfect, delicious and joyful dinner that happened after the General Assembly meeting.

We can now announce you that the next General Assembly will be held in May in the University of Minho (UMINHO) in Portugal. UMINHO are the leaders of Work Package 4, which aims to facilitate the adoption of RRI and OS good practices in RFPOs.